Kishore Kumar > Kishore diary > A Man of Many Moods..

A Man of Many Moods..

Whoever thought that the small boy born to a family in Khandwa in the year 1929 would become a national legend one day? Well, to be honest, not many. Kishore Kumar was at first seen as only Ashok Kumar’s younger brother. But he was not one to sink into oblivion like his other brother Anoop […]

Whoever thought that the small boy born to a family in Khandwa in the year 1929 would become a national legend one day? Well, to be honest, not many. Kishore Kumar was at first seen as only Ashok Kumar’s younger brother. But he was not one to sink into oblivion like his other brother Anoop Kumar. On the contrary, Kishore Kumar grew to be an even greater talent than his elder brother.

Not only was he a great comedian, he also sang for a variety of heroes. Superstars rose and fell and the industry changed from one color to the other, but one thing that was quite constant in this time was that Kishore Kumar sang for all of them- right from the early years to the 70s, Kishore Kumar’s voice was heard by all cinema goers.

Though mostly remembered for his comic capers and phenomenal block busters like Chalti Ka Naam Gaadi, Half Ticket, Nau Do Gyarah and a score of others, there was another facet to this gem of the Hindi film industry. Under this smooth talking, grinning face that launched a thousand films, there existed a deeper, more intellectual man. This man struggled hard to come out of the comic cocoon that was weaved around him, but alas, the opportunities to do so were rare and largely unrecognized. 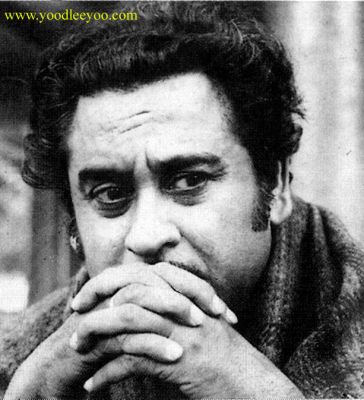 There was no one interested in casting this master comedian in anything but comedies. No director gave it a second thought to cast him in a serious role. Kishore Kumar was simply not given the opportunity to portray a more complex character. So what did he do? Did he give up?

Not in the least. Instead of brooding over his condition, this multi talented genius simply created such a role for himself. He took to the director’s seat and created films that spoke about the maladies of life. One such film was Jhumroo. Though today people mostly remember it for the famous title song, the plot of the movie was way ahead of its time and Kishore Kumar has essayed the title role with such brilliance- it is utterly remarkable. The anguish, pain and heart break has been felt in the most perfect manner and create a feeling of empathy towards the poor soul.

Then he went on to create Door Gagan Ki Chaaon Mein in 1964 which was another proof of his mastery. Once again, he has played the lead character’s role and has done so with great aplomb. The movie brings a tear to one’s eyes when Kishore Kumar is with his mute son in the film. There have been very few instances which can be touted to portray the bond between a father and a son more perfectly than Kishore did.

Another movie which showed the veteran actor in a different light was Door Ka Raahi. Like the previous mentioned, this was also his own creation and the movie has been made on a different level all together. The story, the detailing and the complex characters shows that Kishore was a lot more than the world has acknowledged him for.

Why is that true genius is never honored in its lifetime? Well, whether others accept it or not, this article is dedicated to a wonderful actor who was an all rounder and most of all- a truly talented human being.

This entry was posted on Tuesday, May 15th, 2007 at 8:22 pm and is filed under Kishore diary. You can follow any responses to this entry through the RSS 2.0 feed. You can skip to the end and leave a response. Pinging is currently not allowed.